WBC Heavyweight World Champion Deontay Wilder meets mandatory challenger Dominic Breazeale in a heavyweight title grudge match at Barclays Center and live on Showtime.Live streaming coverage of WBC Heavyweight World Champion Deontay Wilder's press conference today, Tuesday, March 19 from Barclays Center in Brooklyn, New York beginning at noon ET/9 a.m. PT.
Wilder called for a press conference to officially announce his ninth world title defense against WBC mandatory challenger Dominic Breazeale.
The mystery of Deontay Wilder's future in regards to his next fight and what network will he fight on has been answered.
In a press conference in New York, it was announced that Wilder will defend his WBC heavyweight title against mandatory challenger Dominic Breazeale. The fight will headline a Showtime-televised card from the Barclays Center on May 18 and will not be shown pay-per-view in the United States as it was previously rumored. 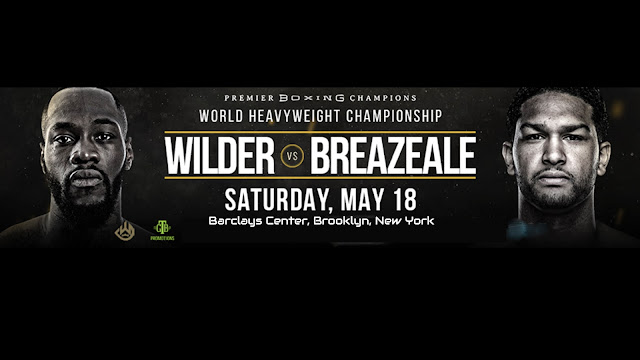 ‘The Bronze Bomber’ had lined up a rematch with Fury on May 18th in New York. Wilder v Breazeale was earmarked for Showtime and BT Sport’s paid platforms respectively.
Due to Fury signing an exclusive TV deal in the US with ESPN, the deal collapsed at the last minute.
Wilder was then forced to turn to his American rival Dominic Breazeale in order to meet mandatory requirements laid down by the World Boxing Council.
Remaining on Showtime PPV was an option, although as Wilder explained, he felt the Breazeale fight was a level below charging extra.

Sky Sports moved to pick up Wilder vs Breazeale for themselves as BT Sport have exclusivity with Fury. This means Wilder will get the chance to feature on the same network as Anthony Joshua once again.
Should Joshua v Wilder ever make it over the line, Sky Sports would hold UK broadcast fights to take the contest to their Box Office platform.
In regards to Fury coming back to the table, it’s anyone’s guess whether that can be salvaged in 2019.


“I’m just really starting to invest in myself as a fighter and for my health,” Wilder said. “People would be surprised at my previous training compared to other world champions. And I still get in the ring and knock you out. But now it’s time to become that ultimate package, that ultimate king. I want to be able to say I did all the right things.”

“Everything I’m doing now is about investing in myself. I’m betting on myself. I want the fans to know that I listen to them. You’ve got a great champion, a great king who will make it happen. Some fights will take longer to happen, of course. Patience will be the key. But put your trust in Deontay Wilder and buckle up, because it’s going to be a hell of a ride.”
Posted by Deontay Wilder Fight at 9:38 PM No comments: